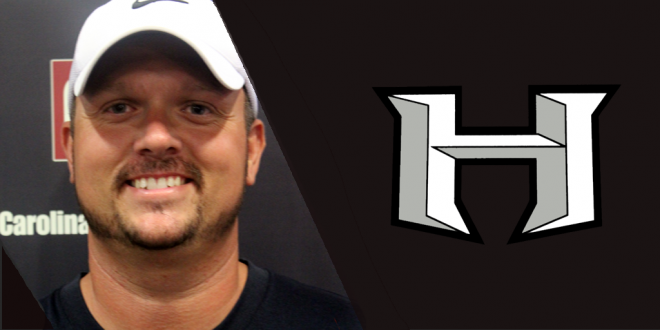 King steps down at Havelock

After just two seasons leading the Havelock football program, Caleb King broke the news to his team this afternoon that he would be stepping down from that position.

A standout football player at Havelock, King was a no-brainer selection as the Rams head football coach following the departure of Jim Bob Bryant after the 2016 season, and in his two seasons leading the program, he posted a 27-3 coaching mark which included a state championship appearance, and a regional runner-up finish this season.

Prior to his tenure at Havelock, he spent two seasons as the head football coach at East Carteret, and he owns a 50-8 overall record.

While it hasn’t been made official, it has been widely speculated that he’ll be announced as a head football coach in South Carolina later this week.

Known as a tough competitor, and a quiet, yet intense leader, he faced the toughest challenge at the school today when he informed his team that he was stepping down.

“It was incredibly hard,” King said.  “I was looking at a lot of great young men, all of them have put a lot into this program, and it’s like a family big family here.”

“I told the seniors in a separate group because it affects them differently,” he added.

In the end, taking care of his family was the primary concern for King, but he admits that it is still hard to leave the coaches on his staff, many of whom he’s known for over a decade.

“I love the relationships with the staff, those guy are my best friends,” he says.  “I’ve also been very blessed about how much outreach I’ve received from guys who played for me at East Carteret, and many who’ve played at Havelock over the years, but in the end I have to take care of the four people that live under my roof, that’s my priority.”

No solid candidates have emerged as leaders yet for the job, but assistant coach Matt Handley along with a few other highly qualified assistants on the staff could have an early shot.

Chris Hughes is the editor and founder of CarolinaPreps.com. A life-long student of the game, he brings a unique perspective of the game from multiple angles, including that of a former coach. His work has been featured both locally and nationally, including FNF Magazine, Scout.com, and ESPN U, and SiriusXM.
Previous Op Ed: Dear Mom and Dad: Cool it
Next 12th Annual Pinecrest Coaches Clinic