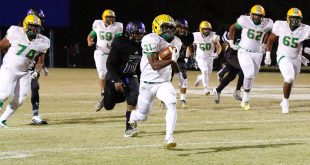 After 54 days of searching, it appears that Richmond Senior High School, one of the most prestigious and successful football programs in North Carolina, has hired a head coach.

When former head football coach Paul Hoggard announced that he was leaving the program for the same position at Edenton Holmes on March 27th, it started a two-month long search that has concluded with Mike Castellano accepting the job today, according to inside sources close to the situation.

Castellano comes to Rockingham from Middle Creek in Apex where he led the Mustangs to a 32-8 record over the last three seasons, including a heartbreaking 24-23 loss to Wake Forest in the 2013 4-AA Eastern Regional Finals.

Prior to his stint at Middle Creek, Castellano spent nine seasons as an assistant coach at Coastal Carolina under David Bennett and has also served as an assistant at Raleigh Millbrook and North Wilkes.

Chris Hughes is the editor and founder of CarolinaPreps.com. A life-long student of the game, he brings a unique perspective of the game from multiple angles, including that of a former coach. His work has been featured both locally and nationally, including FNF Magazine, Scout.com, and ESPN U, and SiriusXM.
Previous West Rowan head coach Scott Young steps down
Next Mallard Creek hires Tripp Stone as defensive coordinator

Chris Brookshire has been tabbed as the new head football coach for his alma mater, …